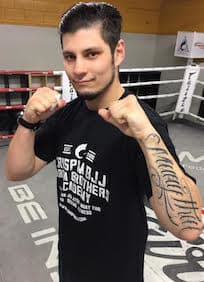 Alan Benson started training with us and joined our team in late 2015 when Alan joined our MMA fight team. He has worked our front desk as a Member Service Specialists since 2016, and is also one of our Instructors for MMA Fitness, Boxing and Kids Muay Thai. Alan is an extremely dedicated, focused and talented fighter, and we are fortunate to have him on our team.

Alan began his training in Tae Kwon Do where he achieved his advanced blue belt over the course of roughly 5 years. He has also been training in Muay Thai for 7 years with a mixture of Jiu-Jitsu, as well as MMA training. Alan has also fought in several amateur Muay Thai and MMA events, and went Pro in MMA in 2018.  Alan won his last fight in September of 2019 on the Bellator stage.

When asked why Alan trains, he states, “I train to be the best fighter and person that I can be, giving 100% of myself in all aspects of my life. I came to Crispim BJJ for the amazing opportunities that have been laid before me, elevating myself and my fight game to a whole other level with phenomenal training and growth. The love, passion and respect that is shown by all the instructors has humbled me. No other place have I seen that has such a high level of care for everyone in the academy.”

When Alan isn’t at the academy, he likes writing music with his guitar, which he has been playing now for 14 years, watching his favorite tv show The Sopranos, reading, and spending time with his family/friends.

Alan adds, “My goals are to be a professional fighter to where I can dedicate everything to Martial Arts and everything involved in it (Academy, training, teaching, events) and eventually be a Champion belt holder for a major MMA organization.”