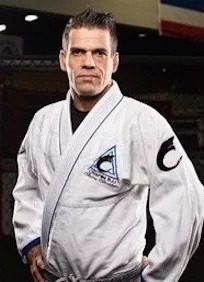 Alexander Crispim De Almeida was born and grew up in Rio De Janeiro, Brazil. He began training in Brazilian Jiu-Jitsu when he was 16 years old with Gracie Barra. As a white belt, he trained with Mauricio Tinguinha and Joao Paulo “Big Head.” Training with such skilled Jiu-Jitsu practitioners began the desire in him to become a Black Belt. He would go to Gracie Barra every day, all day and Master Carlos Gracie Jr. gave him a chance to train under him and many famous black belt students like Roberto Gordo, Alexandre Soca, Antonio “Nino” Schembri, Roberto Roleta, Ricardo Almeida, and many others who are largely responsible for the passion and successes that Crispim has achieved over the years.

During his years of training, Roberto Gordo taught him half guard and through much practice, Crispim developed a very dangerous half guard, which is the position he is most known for performing on his competitiors. Because of the skill he achieved with the half guard, other students started calling Crispim “Gordo’s son.” Gordo became Crispim’s mentor and taught him so much about Jiu-Jitsu and its lifestyle and made an unforgettable impact in Crispim’s life.

Roberto Roleta also trained Crispim a lot and helped him in his Jiu-Jitsu game and he was the one who gave Crispim his first job as a Jiu-Jitsu instructor while he was a blue belt, which ignited his passion to teach others.

Throughout the years, many of his friends became known as the “Barra Brothers.” They are a group of Brazilian friends/brothers who grew up together in the neighborhood of Barra, trained together and shared much of their lives together as the closest of friends. The Barra Brothers include Pedro B. Lacerda,Paulo Tarso, Pedro do “Predio”, Rodrigo Kotait, Sidney Machado, Rafael Capoeira, Rodrigo Calazanz, Rafael Papakinha, and many others… We also want to mention a special Barra Brother, Gustavo Robalo (1976-2004). Without him, the Barra Brothers may never have existed. Like Crispim BJJ, many of them have academies in the United States, Costa Rica and Brazil and share the philosophy and the spirit of the Barra Brothers.

In 2003, Crispim came to the United States as a brown belt and was awarded his black belt by Ralph Gracie where he taught at the Dublin Ralph Gracie Academy for approximately four years. When he started at that academy, there were approximately 20-30 students. Throughout his time there, he increased the number of students ten fold and grew one of the largest children’s programs in the area. When Crispim left Ralph’s academy, he began to focus his attention on professional MMA fights. He fought in events such as Strikeforce, PFC, Gladiator Challenge and Malice at the Cow Palace.

In 2008, he began to teach Jiu-Jitsu at Ultimate Fitness Academy in San Ramon and also at Fairtex in San Francisco. Several months after he left the gym in San Ramon, he decided that it was time to open his own academy in Pleasanton where he would have the freedom to teach traditional Brazilian Jiu-Jitsu with an incredible curriculum that he has spent the past 20+ years creating. Having his own academy was a life long dream, and he wanted to do this for himself, his family and for all of the many students that have moved with him as he taught in different academies. He wanted to provide a “home” for these very loyal students who wanted to learn from Crispim and believed in the “lifestyle” of Jiu-Jitsu that he teaches, including nutrition, healthy living, respect and loyalty. Because of Crispim’s passion, experience, reputation, and loyalty, he was also hired by the UFC Gym in Concord as the first Jiu-Jitsu Coach for all UFC gyms. He taught there for 3+ years, but chose to focus his time and attention at Crispim BJJ and MMA.

The reason that Crispim chose Jiu-Jitsu as a lifestyle was because he was fascinated with everything he would learn daily and that there was ALWAYS something else to learn, always challenging his body and mind. As a teenager, it helped build confidence in him and helped develop his character and personality. It is largely responsible for making him the person he is today. Crispim says, “I feel that with Jiu Jitsu, I am able to change someone’s life for the best which I feel is priceless. The feeling of helping someone improve their life and character is unbelievable and that is the reason I teach. My goal is to teach students who are looking for a better way to live life, stay healthy and in harmony with their body and mind.” This philosophy, which can be called a “Lifestyle,” has been propogated by Grand Master Carlos Gracie and Helio Gracie for almost a century.

Alexander is married to Michele and has three children, two sons (Frankie and Niko) and a daughter Athena. He lives in Pleasanton with his family.